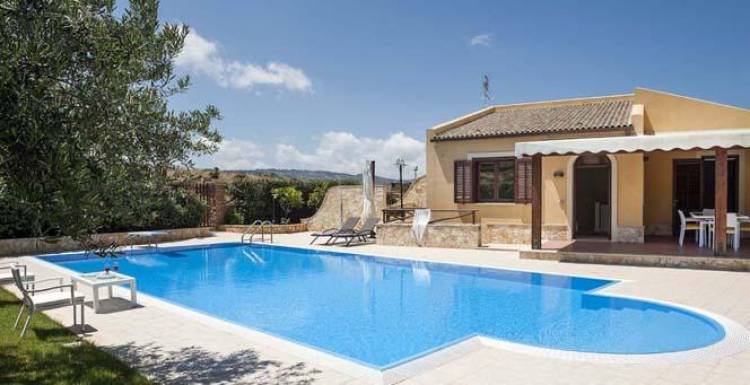 FERIENHAUS SIZILIEN, UMGEBUNG PALERMO: On the north-west coast of Sicily, along the foothills of Mount Pellegrino between the Conca d\'Oro and the Tyrrhenian sea, lies Palermo, the capital of Sicily with its fascinating wealth of extraordinary monuments, a tangible testimony to the numerous dominations throughout the centuries. A real architectural and artistic heritage, from the Arab-Norman palaces to the baroque churches and art deco villas. The ancient and evocative alleyways and streets in the historic centre are alive with tradition and folklore particularly in the four markets of Capo, Ballarò, Vucciria and Borgo Vecchio. The town is also well known, not only for its cakes and pastries, but for its wonderful cuisine, with its unusual mixture of foodstuffs from various cultures and has recently been elected as the world\'s street food capital where characteristic kiosks and food shops abound. The hinterland of Palermo is also well worth a visit with its numerous wineries, the charming villages in the Madonie park and those of Albanian origin. Tourist resorts, such as popular Mondello, line the coast, as do splendid sandy beaches, like that at Balestrate near the Gulf of Castellammare. A visit to the majestic Arab-Norman cathedrals of Palermo and Monreale is also an absolute must.